Though we were having a grand time enjoying the hospitality in Jasper, Alabama, it was time to move on.  We shared breakfast with Gordo and John and chatted briefly before moving the airplanes out of the hangar for departure.  Inevitably, our luck with winds changed and the following blurry capture of the GPS in 160AK shows that the cars were now passing us. 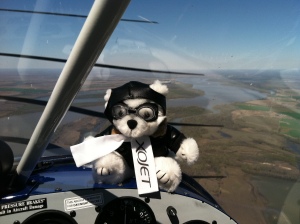 Missouri on the opposite side of the river!

We stopped at County Memorial Airport for fuel and got to see some Air Tractors in action, which was unique because spraying season would not start for us until mid-May at the earliest.

We stopped for gas in Kirksville, Missouri, before starting what would be our last leg of the night.  We had made great progress but did not feel like closing out a long day with a night leg, knowing we wouldn’t be finished unpacking and tucking the airplanes away until at least midnight.  The evening was about as nice as one could hope for, with smooth air, clear skies, and a beautiful sunset.

The fun meter was pegged, and the bear approved!

We started hunting around on the GPS for a good place to call it a night.  We had had a nice stop in Osceola on the way down, but thought maybe we’d get a little further (plus, we weren’t sure if the gas pump was still having problems).  The final leg home to South Dakota would be nice and short compared to the previous days but we’d be rested and fresh having stopped short.

A smooth evening flight watching the sun slip away

Never having been to any of the airports we saw, we essentially threw a dart and picked Winterset, Iowa.  It was getting dark as we arrived in the pattern and since it was 8 pm or so on a Tuesday, the place was deserted.  We poked around and found that we had access to bathrooms in the FBO as well as a selection of chair cushions (no couches).  There was also a cat that was desperate for attention (we later found out his name was Football, because he bore a striking resemblance to one).  We considered departing for another airport after we called and found there was no courtesy car or shower, but elected to get our exercise and walk to town.  Armed with the ever-present iPhone, Amy confidently declared which way to go, which turned out to be one of the darkest and most isolated gravel roads around–it even went through a small section of woods for good measure!  It was discussed who could run faster, Amy or Dave, in the event of critter attack and all sorts of banjo jokes were made, but the walk wasn’t bad.

Tied down for the night on a beautiful night

Airnav claims that the airport is one mile north of town.  For the record, that is one mile straight-line distance from the southmost point of the airport (in this case, the southern end of the runway).  Walking distance was about 2 miles one way.

We finally made it into town at around 9:30, but apparently Winterset calls it a night at around 9.  The Godfather’s Pizza was closed and while we could have procured a pizza at the local Casey’s, we were hoping for a place to sit down and whine about the walk.  The gals at Casey’s suggested Subway, further into town.  We started hoofing it further south at 9:46 and Subway closed at 10.  With a little pep talk, we were there at 9:52.

We ordered and unceremoniously plopped ourselves into a booth.  While we didn’t want to hold up the employees, we weren’t quite ready to start the return trip.  Around 10:30, we asked the manager and employees if they would be willing to give us a 3-mile ride back to the airport.  Unfortunately, they were unable to do so so we began walking northbound.  Having had good luck with the friendly gals at Casey’s, we stopped in around 10:45 looking as innocently hopeful as possible.  They informed us they were carpooling together but that if we could wait until about 11:15 after they closed up shop, they’d be happy to give us a ride.

We happily waited outside enjoying the evening.  It was a little chilly but we were relieved to not have to walk again now that we were full and working towards sleepy stage.

Upon return to the airport, pilot creativity took over.  With no couches and only a few blankets/sleeping bags, we built two makeshift beds out of chair cushions.  Aside from the fact that Dave stole Amy’s blanket for a pillow and Football the cat insisted upon visiting Amy incessantly, it wasn’t a bad night (although it was better if you hadn’t gotten your blanket stolen).

Morning brought a light, high overcast and light winds.  After fueling the airplanes, even that went away revealing a brilliant blue sky that just begged to have some Super 18- and PA-12-shaped holes poked in it.  We bid farewell to one of the local pilots and Football the cat and off we went! 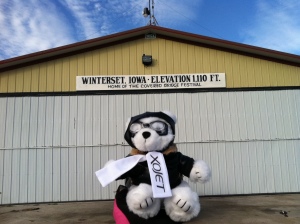 Winterset, IA is also apparently the birthplace/hometown of John Wayne!

The last leg back home was bittersweet.  The idea of home, with a familiar bed, was alluring but it seemed the call of the wide-open sky was even more enticing.  Put two fun-loving taildraggers and their fun-loving pilots together (especially if they’re not picking up the gas tab) and you have a recipe for aimless wandering.  Back home was where we would find a two-week backlog of work and school and all those grown-up responsibilities that we pilots prefer to eliminate.

Unfortunately, responsibility won this battle and we made a beeline for home (with the exception of two “announcements” at a nearby airport that we had returned).  We dropped off the PA-12 at one of our hangars offsite and brought 160AK to DCA HQ.  Thus concluded the grand adventure of Sun ‘n’ Fun 2011! 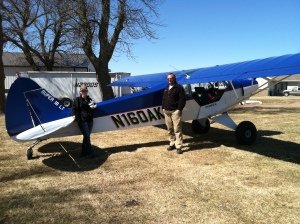 Almost never thought we'd see this . . . back at DCA HQ, where the grass wasn't green yet.

If ever there was a well-deserved oil change, this was it! Thanks 160AK!

The flight there and back took 36.7 hours, and we didn’t even get distracted!

The difference in fuel burned equates to approximately 5.8 extra hours of flying on the trip down versus the trip back.

The trip south took six days with one full weather day in Sparta, IL, and almost a full day in Sparta, TN.  We spent about half of the day waiting in Decatur, Alabama, and Bainbridge, Georgia.  We departed at 9 am on a Thursday and arrived at Lakeland at 7:15 pm on Tuesday (we arrived in Plant City around 4:30 pm on Tuesday but had to wait out the airshow).

The trip back home took four days with one weather day in Jasper, Alabama.

By some quick math, the average groundspeed was 79.03 mph and the total trip length was 2,900 miles.

Number of nights in a hotel: 5 plus 1 night during SNF after the storm (4 of which were in Holiday Inns, too bad we didn’t sign up for the rewards right away!)

Number of nights in an FBO: 3

Most convenient for pilots: Jasper, Alabama with Bainbridge, Georgia a close second (the keys for the van in Bainbridge must be given to you by one of the friendly employees unless previously arranged, which is very easy to do!)

Number of airports with dogs: 2 (surprisingly low, pooches found in Fulton, MO and Sparta, TN)  Note: Bainbridge, GA, is very active in Pilots and Paws–Tony started the organization up at KBGE

Most historic: Bainbridge, GA, which was a BT-13 training base in WWII and continued to serve as a training base through 1961.  You may recall we had the honor of parking our Super 18s in one of the original hangars for a night.

Another note which is rather sad: we met 9 pilots that we flew with along the way.  Of those 9 pilots in 7 aircraft, 4 aircraft suffered damage in the storm at SNF, with 2 being totaled completely.

It certainly counts as an adventure.

Dakota Cub is the manufacturer of the Super 18 family of aircraft. We are also a supplier of FAA PMA'd parts for various Piper aircraft models no longer supported by the factory. We have numerous STCs for improved parts and other upgrades as well.
View all posts by dakotacub →
This entry was posted in Uncategorized. Bookmark the permalink.